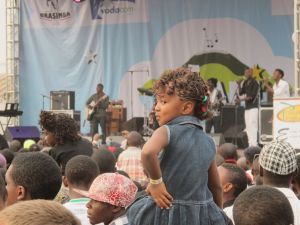 Going back a bit, the weekend in Goma had been discussed for many weeks before it suddenly arrived. At one point we were going to be a marauding band of danger tourists, totalling five adventurous souls. When it came to it we were a plucky gang on two; the ILPHy (aka the wife) and I.

And so with our CEPGL visas in our hands and $15 for car, we entered the place where malevolence knows no bounds; the heart of darkness… DRC… and… it turns out that it wasn’t very dark. The first impressions were that is was at lot like Rwanda but with more expressive people and worse roads. We immediately met up with our friend who showed us around the plushest compound in Goma and then to our luxurious suite. 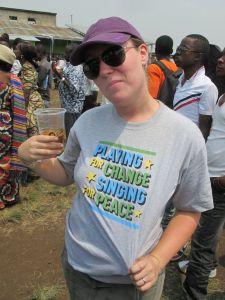 Once settled in we headed off to the main event. Amani! … Amani … Amani! … we bobbed along the only barely paved road in Goma. At place where the crowds were the densest we plunged in. The stalls on the way to the stages in were pretty relatively pointless but we were not there to see them. The vibe was great. In the main arena the sense of anticipation was palpable. After a bite to eat and a few beers, the acts began. What followed was medley of Africa acts and interspersed with acrobats, drumming and dancing. The crescendo was of an an African singer who everyone knew and loved (although we were a bit out of the loop!).

The light was going so it was time to see what the Goma nightlife had to offer. We went to Coco Jambo and had a delightful dinner; then onto a house party, where seemingly every anglophone muzungu in town was present. As an aside, the Goma muzungu is a slightly different breed to the Kigali muzungu. They are a bit more off the hook and party ready as if that this could be their last day on earth. So the party went down, came up, went left, then right and we were spat out at 4am. 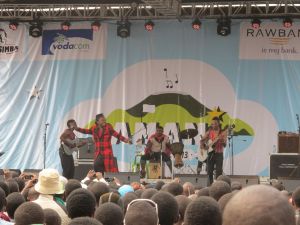 The next day was fuzzy but it was no time to hang around; day two of the festival awaited. It was was the same chilled deal on the second day except the Mani Martin stole the show. Half way through his set he started this song “Mamadou rest in peace, tu restera dans mon coeur”. The whole crowd took a huge collective breath and then went nuts! Crazy! Mental! The song continued in a similar vane with the whole crowd singing along. Again we were a bit culturally lost but joined in anyway. It was only later that we learnt that Mamadou was Colonel Mamadou Ndala of the Congolese army. He had pushed the M23 out of Goma and gone to defeat and ultimately disband the M23 up country. This defeat made him the most popular guy in the eastern Congo. Unfortunately while up in the bush north of Goma, his convoy was attacked with his vehicle taking a direct hit from an RPG and he was killed. Some think the action was a M23 retaliation, even though they had been disbanded, or being the most popular man in eastern Congo made him a powerful and was a threat others… So Mani Martin sung this tribute with Mamadou’s death still raw in everyone’s hearts.

After Mani Martin, we decided to walk back through Goma towards the border. On the way we dodged the locals who were quite persistently gabbing at our wristbands, looked at the arts and crafts market, nodded to the Uruguayan UN peace keepers and experienced the general unease of Goma.

The Armani festival was great. We can not wait for the next one!