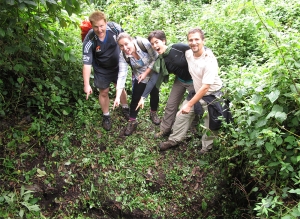 There are two Congo-Nile trails but only on the Nyungwe Congo-Nile trail do you get to see the source of the NileWe all had a few spare one April so we decided fill out what Ptolemy only guess at. We drove down through Huye to Nyungwe, played hide and seek with the national park guides and then set off for the start of the walk to the north. Having to take everything with us including water we hired porters. As we started the wrong way round in the North we quickly happened upon the source of the Nile, which was a slightly unimpressivedribble of water. What I found more mind blowing was as we were water along if water fell to the right of me it could end up in the Atlantic ocean and if it fell to the left of me to could end up in the Mediterranean. It made me fell very small!

Again as we started in the wrong way round it was a make shift camp for the night where the porters made a whole furniture set for us to use out of the adjacent foliage. Over the next few days we experienced many different plants but very few Animals. As we went up and down between the Congo and Nile basins we saw lake Kivu and had a lot of time to chat and get a way from it all.
The Congo-Nile trek was ok but I would only do it if you have worked your way through most of the exciting things to do in Rwanda.