One Sunday afternoon we received a phone call; “Do you want to go and explore Kigali’s abandoned amusement park?”. After ponding this unexpected question the wife (aka ILPH) and I decided we did. 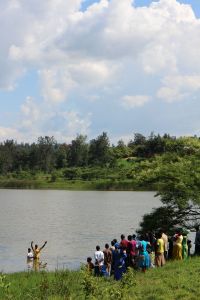 Everyone met up at the MTN centre and set off down the hill towards the golf course. The group seemed to be split into two camps: those who knew and those who were still confused about this fabled amusement park. Some people had been in Kigali for quite a while and were wondering where it was hiding. The story that we received was that a dutch NGO managed to procedure loads of amusement park stuff. They managed to deliver the stuff but it was never commissioned and then it was forgot about. Can anyone out there confirm or deny this account?

When we reached the golf course road, we immediately traversed it into the green open space beyond. We walked around the lake. At the far corner, we came across a group of Rwandans at the edge of the lake with two in the water. After minimal speculation, we realised it was baptism old school style. And so with a mixture of muzungu fascination and muzungu guilt around the chance of causing a disturbance to this sacred right, we approach and took some photos as  reverently as possible.

After a short while it was the main event; a series of overgrown oddities. The first oddity was some dodgems. Next were some bubble and horse rides and the piéce de résistance of a mermaid. After too more sights, we all imagined what might have been, alas now everything is green and degraded. The ILPH did try and kiss the prince frog but she already had her prince charming.

We made to back to the road, zigged and zagged up the hill to the MTN centre once more. The abandoned amusement park is quite strange and erie. Check it out!