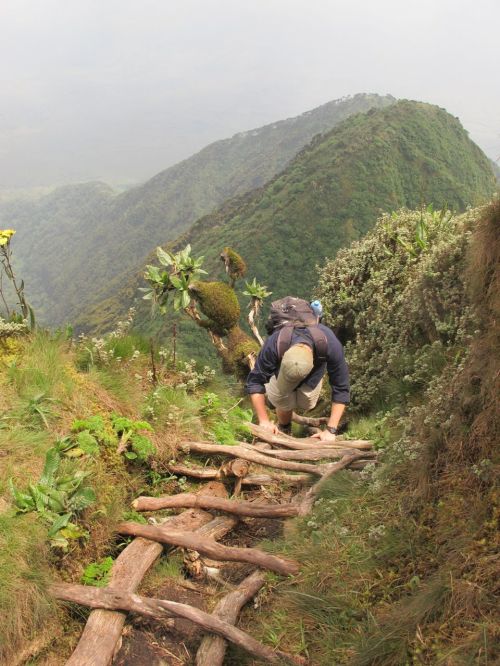 Maghunga is a small perfectly formed national park. The Virunga volcanos are spectacular sight. Even so one can only image the awe which greeted the first western explorers seeing the glowing peaks after hacking through the now obliterated mountain jungle.

We tripped up to the edge of the national park along the worst road we have ever driven on. It’s not that the road was the most uneven. It was that it was uneven and made of the hardest, roughest volcanic magma. One false move and the immovable magma could take a chuck of your off! We made it to the national park and camp site with the car just about intact. We organised camp and requested the menu. We were offered vegetable rice for $15 each. We were astounded and proceeded to go Mgahinga, the five star lodge 200m down the road, and had a fine steak for $15 each.

The next morning I set off up the volcano Sabinyo leaving the ILPH behind sleeping. A group of eight of us venture forth. Through the bamboo forest first, then onto the foothills. After while we hit forest and started to climb. Every so often there were ladders to aid our ascent. The guide gleefully informed that there were two false peaks. When we reached the first peak the views we awesome; volcanos to the left of us and volcanoes to the right. This was when the ladders really kicked in for both up and down. We zigzagged up and down the ladders until we were at our destination; the top of volcano Sabinyo. We ate lunch then descended. We met a few chameleons and the way down seemed an awful poet long than the way but we made staging back down.

The volcano Sabinyo hike is awesome. Don’t miss it!