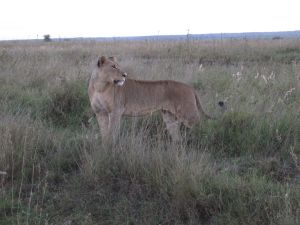 Kenya has been on the list for a long time ever since university where we met our good friend Ashish. So it was good to be able catch up and have a look round. For once arrangements were made in good time to meet up with Ashish and see development work by both of the companies the ILPH and I work for. Halcrow had designed a revolutionary sanitation installation and the GEMS Varkey Foundation is funding a school for orphans both in the largest slum in Kenya and reportedly Africa.

We arrived 6.00am in Nairobi…. As we emerged we clocked Ashish straightaway; the first time in 5 years! We were looked forward to our Kenya adventure; bring it on. Our enthusiasm was tempered due to hefty traffic… in the carpark. This provided time right away to exchange stories with each other from our 5 year absence; it felt like the ILPH, Ashish and I were right back at uni. After 1hr in the carpark, we finally left the airport and we were out into big bad Kenya.

Nairobi a first glance is pleasant and for the entire trip remained so. Initially we were on our guard because of the stories you hear, a chap we met in Addis Ababa thought you would have to be crazy to even contemplate going to Nairobi and there is always Nairobi’s warning nickname of Nairobbery… But after a while it is just like any other city don’t be in the wrong place at the wrong time. We checked in to our hotel then went for a coffee at Westgate; one the new malls that are springing up all over Nairobi. Next was the trinket market to see what was the latest and greatest in Chinese sorry I mean African trinket manufacturing.

The ILPH’s school had been raising money for the Raila Education Centre in Kibera, so that afternoon we had arranged to go visit the site. Luckily the prime minister’s education advisor Christopher Khaemba was on hand to introduce us to the head master and they both showed us the plans for the new school. Christopher had a particular concern that the funds had not been transferred for the school from the GEMS Varkey Foundation even though the breaking ground ceremony had taken place 2 months before. We reassured him that we would pass on the message back to HQ and then he departed. Mr Paul the headmaster showed us around the site and a little bit of Kibera. While we were walking around a strange train pulled up, the is site is close but set back from tracks, and began empty rubbish off the side the low carriage. Sadly, it seems that the rest of Nairobi think the Kibera slum is also a landfill. That evening we ate quickly and collapsed.

The next day brought a visit to Carnivore, another visit to the Kibera slum and an evening meal at the UN dominated Village Market. We made it to Carnivore for lunch. We ordered some crocodile which was nice. It’s a shame that all the other bush meat was not on the menu as bush meat was banned a while ago; but you can not argue with that. This time is was my turn to see Kibera as my company Halcrow had helped design a sanitation installation. We went to see Josiah Omotto at the Umande Trust which has built about 40 of the toilet block/bioreactor/community centres in Kenya. We had a chat and then went down to see the first community sanitation facility. We walked through Kibera lite and discussed the issues that they we facing. The biogas produced is piped directly to the surface at the sanitation block and people tend not to want to cook there but back in their own dwellings. The price of access to the toilet block was $3.5-$5.0 a month for a family. Although seemingly quite expensive for something that is free if you relieve yourself before the sanitation facility was built, I latched onto it and if this was case maybe this can be self sustaining and with the proceeds you could incest and build more and more facilities for the people of Kibera. I asked what was the time period with which the earnings could build another facility. 7 years was the reply. Brilliant I thought as the first facility was built 20 years ago so next year could have built 8 blocks and in 7 more year 16 blocks. However there was also a mention of new money is always required to build more facilities. I counldn’t square this circle of needing more money when they pay for themselves in 7 years. We reached our destination and met the facility manager; the best dressed man I saw in Kibera. He show us around, toilets on the ground floor with gas stoves, a rentable office and the first floor and a community space on the second floor. 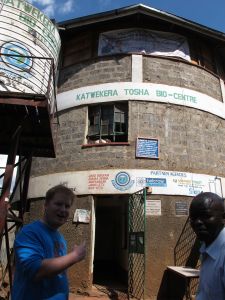 We walked back and at the office we spoke with the wider team. They asked us if we had any comments or suggestions. I was a bit stumped because technical aspects seemed sound. Within an area like Kibera you are not going to get large networks of infrastructure so a manageable single site seem preferable; a solution in which your inputs produce valuable out puts in the form of biogas and fertiliser. All the further innovation and improvements for this design would seem to come on the organisational, revenue generating and marketing side. This is where a lot of aid falls down the west can build lots of things in developing countries. That’s the easy part. How do you make the infrastructure sustainable and trust the communities to run the infrastructure to produce maximum benefit. Should we approach these issues with a western mind set because that produces western solutions that are at time unworkable in a non-western situation? With the whole aid/development still not solved and no easy multi-step road map for development across the entire third created, we departed. That evening we went to the relatively decadent Tamambo bar restaurant at the Village Market and forgot about all those development issues.

Our third and essential final day in Nairobi was set up to be a cracker. We went to feed the elephants at the orphanage, the Nairobi Safari Park and finished off with fine Kenyan food from Amaica restaurant. We made it to the orphanage just before 11am; feeding time. We stood around for a few minutes then from behind a distance bush the first elephant appeared making haste for the feeding ground. More elephants followed and before you knew it there was a long line of baby elephants almost tail to trunk like the movie Dumbo. When they reached the feeding area they began to positively suck large bottles of milk dry. Once they had had their fill, the baby elephants began to wallow and roll over in the mud pits; it was very cute. We can highly recommend the elephant orphanage.

Next for the main event of the day: Nairobi Safari Park. Although the ILPH and Ashish had both been on many safaris, this was my first. I knew it wasn’t the Serengeti but I was still excited. We drove in took a right and saw lots of giraffe, and antelope. We made it all the way down to Hippo Pool. Under armed guard (there had been an recent “incident”) we walked around and saw hippo, crocodile and tarapins. From Hippo Pool we drove directly into the centre of the park and saw a lot of Zebra, some Buffalo and a Rhino. The sun was beginning to go and there were still no signs of Lion. Ashish mentioned that last time they saw lion a bit back towards the entrance gate around this time so we head for that spot. It did not disappoint. We happened upon two lions in the undergrowth about 100m from the track. They began to move in the opposite direction that we were coming in parallel to the track. We quickly turned around and followed them. As they strolled along the came closer and closer to our track until strolled right across our path, they stopped looked at us and then continued. We wanted to follow them further but the sun was down and we had to dash for the exit. I started the day with none of the big five and finished with 4 of them; just the leopard to go… A little bit peckish we went to Amaica restaurant for top quality Kenyan food and then finished it off with a few beers at the K1 Klubhouse. We said our goodbyes to Ashish and made him promise to come and visit us soon.