Like anywhere in the world, Rwanda has crime. However unlike all of its neighbours, Rwanda’s crime is low level and seemingly none violent. The following is a summary of our and friends experiences:

We have been a victim of the “inside job”. We were moving from our friend’s house to a new house and we wanted to take the security guard with us. Unfortunately he was not ready for three months. So we employed the chap who replaces the guard we wanted when he is on leave. The replacement was more immature and turned out to be much less trust worthy. Within two days of being on leave, he burgled the house taking the most of the valuable items. We found out later that he had acquired a local girlfriend in addition to his wife and children in the village, and that they had run off together. We contacted the police but nothing was ever recovered.

Another expat friend had their house clean out by the guard again with the TV the prized item.

A Rwandan friend had their electronics stolen by the his house help. Yes, the TV and computers. What is sad about this case is that the house help had been with him for many years. He was leaving to go and get married and to settle down. They helped him with the married costs and gave him a grand farewell. Unfortunately this was not enough to stop the burglary from happening L.

One expat friend had quite a few days with one thief. One night a thief popped over the wall took his shoes off to quieten his footsteps but was stop by her guard and they tied him up and called the police. The police said that they would not collect him stating that you have bring the thief in! So late at night they dropped the thief off and thought nothing more of it. The next night our friend opened curtains to find the same thief outside her window! I didn’t not know this be as natural reaction she made an American Indian sound (apparently you do this in a crowded place, the point being anyone not doing this is probably the thief running away and then you get thief). Yes the thief had returned! We can only think for his shoes. It became apparent that the police do not always proscute thiefs or altleast detain them for a while and it reinforced that Rwanda’s really like their shoes!

We had others the had been burgled or attempted burgled four times. The highlights of which are the guard being locked in his room and wire coat hangers being used through the window to retrieve stuff. They end up getting contact alarms on theirs windows, which seemed to do the trick.

We had a member of the diplomatic community have a burglary, which is unusual. More unusual still was that they stole an eclectic array of items while leaving the TV (very unlike a Rwandan thief). This burglary was very strange…

We (my wife) has had her bag stolen twice from bars in Kigali but do not become too sad the CID return the items both times. This is remarkable by any standards!

The first time was from Dolce at the Péage intersection down from UTC roundabout. We found out the bag was stolen so it was to “Find my iphone” immediately. The phone was merrily making it’s way up to Kimihurura… We and our friends tried to phone it but no answer. We jump in the car in pursuit. Then the my wife’s phone phoned our friends’ phone. Crazy! It was the uncover police. The uncover police man had been hanging Ogopogo when two men approached him trying to sell an iPhone. He asked for a look only to see a picture of two muzungus on the front. He immediately arrested them and phoned us, brilliant. We caught up with them and by are very faces proved the phone was ours! 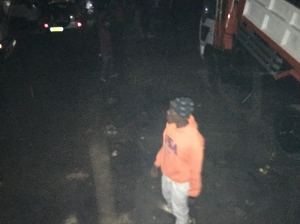 The second time was at Mr Chips. We had be having a meal we about 16 friends. My wife and I were faced into the restaurant and my wife had put her bag on the floor next to her. At the end of the meal my wife realised that everything in her bag had been stolen L. Then everyone opposite said “Oh, yeah. We did see a strange man drinking a beer come over and sit next to the railing outside.” These were ours friends and it was done now so a resisted the reaction of “WTF. You saw a dodgy guy drinking a beer and sitting next to the railing and you didn’t tell him to sling his hook!?!”. Next came realisation that because my wife have been doing boxing her irreplaceable engagement ring was in her purse. Bugger! So it was to “Find my iphone” again. This time is going to up to UTC. To our friends’ bemusement we jumped in the and began the chase. The phone continued down to Nyabugogo and stopped the edge of a road. When we reached the road, I jumped out a woman with a largish bag started to run away. I chased her and other started to too as well. I caught her. She was in distress and us and a small group ask her to empty her bag. I took a look a find my iPhone and the dot hadn’t moved. We had the wrong person.

I went back to the dot and started looking around. I jumped across some sewage filed ditches, nice. Then came to a compound wall. My wife was around on the main road. I climb the wall. As I reached the top I saw ten guys around three cars. They saw me. “Hi” I said “I know you have my phone and wallet. Please give them back and I will not involved the police. Just give them back.” They were a bit flummoxed and it took them a few moments. “Which phone are you talking about. Where from?” This confused me and after a bit of back and forth it became obvious they had no intention of returning the phone. I was still on the wall and my wife asked if she could do something. “Do what you have to do” I said. She preceded to gather as many people as we around and to storm a side gate to the compound.

Eventually I said “from Kimihurura. Mr Chips” to the thieves. Two seconds later a car sped off. I just managed to get the number plate Just after my wife stormed in with the crowd. At that moment the crowd has just realised that then had stormed into an enclosed compound with ten harden criminals and so put my wife to the front. In any case it was for nothing and the phone was on the move again! We jumped back in the car and enlisted a passing fully loaded police van. So us and the police weaved through traffic and headlights following the iphone all the way back to Mr Chips. The dot stopped moving and when we arrived at Mr Chips we found the iphone and an empty wallet. NO ENGAGMENT RING!

Next step, next step what’s the next step? We took the police back to Nyabugogo to investigate the compound. However they wouldn’t. First they changed shifts and then the new shift refused. So we went to the Nyarugenge police station and gave a statement. The police officers asked questions, while we were saying that we busted the ring in the compound lets go they will get away. (by that time we realised “Which phone?” meant they had been stealing phones from all over the city and that they we a crime ring). However the police took no action. Then came the question… “How much is the ring worth?” What to answer? If it is little would they investigate? If it too much would they find ring without it reaching us? I answer truthfully RWF 3 million. Their collective eyes widened.

When we arrived at the traffic police HQs they we excellent they went straight to work on stopping the car and went down with us straight to the compound simultaneously scratching their heads as why the normal police had not made the visit already. The traffic ploice had a look around asked the guy on the gate about the comings and goings of the night before but came up with nothing. And that was where is was left I flew out for Christmas.

My wife was flying out a week later and luckily while I was away bumped into an expat friend who knew the deputy of CID. My wife met with CID but we did not hold out much hope. 2 weeks after we both returned from Christmas there was no news. Then one day the call came. The CID had found the car, approached the house in Gisenyi where the car was registered only to find it empty. Then they found the thief quickly moving towards the border with the ring in his pocket. CID had found the ring over month after it was stolen!!!! Incredible!!!! We are now still the owner on the original engagement ring and are very thankful of the Rwanda CID.

Other hotspots for bags being stolen are Sundowner and the old Lemontree. It is always our female friend that this happens to so being on your guard.

I had a bag stolen from me just out the Serena in Gisenyi L. I was waiting for a car and a trinket salesman distracted me and someone from behind took my site back with all my import stuff apart from my computers. It was funny everyone said it will be ok you will get your passport and papers back. No problem. The next morning I received a phone call that all my papers and passport had been found and was waiting as the police station…

An expat friend had a thief try and take their phone out of the their while they were waiting at the RDB lights luckily they did not succeed.

Car to car hit and run 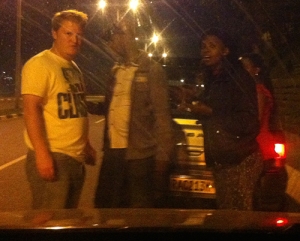 One night our from right wing was hit into at high speed down from Peage junction. At first they tried to speed away but they remembered the police at the next junction and pumped over. We tried to get the police to come but they wouldn’t. We took photos gathered evidence. In the car was a male driver and female passenger. The female passenger did all the talking and agreed to pay the repairs. There was little else we could do without the police. Luckily at that moment some Rwandan friends stopped recognising the tyre cover. In turned out useful to have witnesses.

The next few days we called them and receive “yes, yes” “ejo, ejo” after a week and things were still not moving there was only one thing for it; traffic police. I went along with the evidence. I have to show where the accident happened after meeting my case worker about three times he could tell that I was not going away and he would have to do something. He phoned the female passenger. Her first reaction was to lie, then to talk her way out of it but then the police officer said if you do not repair the car the police take the car sell it and use the money to repair our car. After hearing this within to days the car was fixed and we all moved on with our lives.